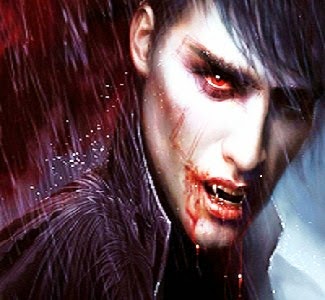 
Chapter five
“I knew you were a killer. Actually, the name Blade is becoming known among our kind. I’m impressed.” Lander snarled as he flipped them once again. Blade was on his back, his eyes peeled wide open. There was fear there… and acceptance.
Lander grabbed those slim legs and jerked them to his shoulders. “To try to kill me, while having sex… You are damn brave, Blade.”
Tears rose in Blade’s eyes. “I-I couldn’t do it. I couldn’t kill you. God help me, I couldn’t take your life.”
Lander slammed back into Blade, grateful Blade was still loose and wet. He thrust hard, but he made sure he was nailing that special bundle of nerves. Lander raised Blade’s legs higher, nearly bending Blade in half. He thrust into Lander harder.
“I… do not—” Lander snarled as he reamed Blade’s ass “—have… that… problem. Come, damn you!”
Lander bellowed as Blade tightened around his cock, pulling his orgasm from him. Then, he struck, his fangs sinking into Blade’s neck.
“Ahhh, fuck!” Blade screamed.
Lander injected his venom then jerked back to stare at Blade. “You are going to be worthy mate.”
Blade’s mouth fell open. “Wh-h-at? Mate? But, but, you said not biting. I-I… Why would you do that? I thought you’d kill me after what I…”
“I have.” Lander tapped Blade’s lips. “Killed you, that is. I’ve fucked you, came in you twice, bit you. There’s no getting away now. You are dying.”
Blade shivered. “But… I assumed the bit was how humans are converted.”
Lander thrust against Blade again, their cocks moving together through the precome Blade was leaking again. Lander ran his finger tips over Blade’s lips. He grinned when he noticed Blade tried to reach up and couldn’t. The venom was working.
“Such lovely skin, sweet.” Landers voice then changed. “I’m surprised at you, Blade. You should never assume anything. I would have thought a killer like you would be well aware of that lesson.”
Blade froze. “Are you telling me the rumors about sex changing a human are true?”
“Yes. You have my seed in you now and it’s changing you. All that is left is for me to give you my blood. It’s all about blood and come. ” Lander bit into his wrist.
Blade tried to turn his head and couldn’t. “But, but… I don’t know that I want to be…”
Lander held his dripping wrist over Blade’s mouth. “Open, Blade.”
Blade narrowed his eyes but did what he was told.
Lander sighed in pleasure at the frantic sucking at his wrist. “Ah sweet, before you took the knife to me, I would’ve given you time. Now, we do it how I want, and I want you as my mate as soon as possible. You’re going to be one of the most deadly Derkelyng ever, my own knife. I’m so proud.”

SIX months later Lander arrived at Lafayette Square. He waited by the bronze statue of Henry Clay as he had been asked by his mate. The night was nice, the moon shining brightly. There was a slight fluttering in the air then Blade was standing in front of Lander.
“One day we will soar over the city because you have asked.” Blade grinned. “Is that what you told me back then?”
Lander reached for his mate. “Indeed, I did say that.”
Suddenly, Blade wrapped his arms around Lander and lifted them off their feet. He kept going until they were soaring above the buildings… just as Lander had said.
“Um, surprise,” Blade said as they floated.
“Surprise? Oh my sweet, for one as young as you to have this kind of power is unbelievable. I am so proud of you.”
Blade blushed. “I wanted to show you on our six month anniversary. I just hope I can get us back home.”
Lander hugged Blade tighter. “Don’t worry if you can’t, I’ll take the flying over.  I’ll… ah… catch… If you know what I mean.”
Blade red eyes blazed. “Damn, wait until I get you home. I want you on your hands and knees… after I’ve cut your clothes off.”
Lander chuckled as they drew closer to home. “You and that damn knife.”
Blade winked. “Right, wasn’t it you who suggested blood play, my mate? So don’t tell me you’re afraid of my little knife.”
Lander growled as his feet hit the ground. Blade had gotten them back to the apartment building.  “Never, sweet. You couldn’t hurt me then, and you can’t now. You are a fierce Derkelyng, and you are mine.”
“Got that fucking right.” Blade pulled his knife and sliced open Lander’s shirt. “Now get to stepping before I strip you out here. Bedroom, now.”