Cover Reveal for Texting, AutoCorrect, and a Prius at MM Good Book Review and a Giveaway! 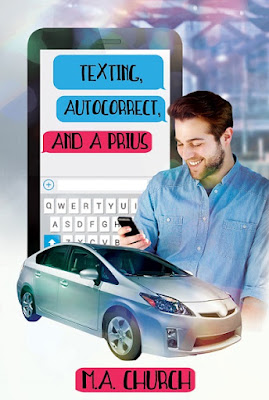 I'm at MM Good Book Reviews showing off my shiny new cover lol. Stop by there for an exclusive excerpt and a chance to win a book from my backlist:
https://mmgoodbookreviews.wordpress.com/2017/05/29/texting-autocorrect-and-a-prius-by-m-a-church-cover-reveal-guest-post-excerpt-giveaway/#more-54220


Blurb:
Clay McDonald finds the perfect car on Craigslist and is quick to send the seller a text:

Is your penis still for sale?

Luckily Darrell Anderson, a mechanic and the owner of the Prius, is more amused than offended, and the two men agree to meet. When they do, the attraction is instant, and a date is arranged. But a series of mishaps, misunderstandings, and misplaced assumptions sorely test the new relationship.

In a contemporary romantic comedy about the perils of technology and dating in the modern world, a text that went so wrong might just lead to something so right—but only if Clay can refrain from jumping to conclusions and give love the benefit of the doubt. 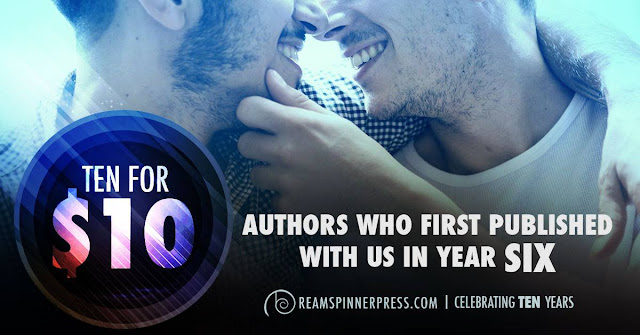 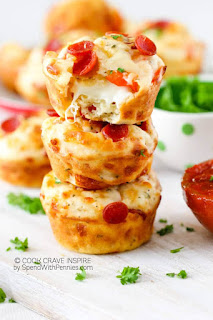 pepperoni (or your favorite pizza toppings)

Unroll crescent rolls. You will have 8 triangles. Pinch seams to connect 2 triangles so you form 4 rectangles.

Place 1/3 cup mozzarella cheese and pepperoni in each rectangle. Fold over and pinch to seal all sides. Repeat with remaining sections.

Place each piece of dough on the preheated waffle iron. Close and cook 5 minutes or until browned.
Serve warm with pizza sauce for dipping. 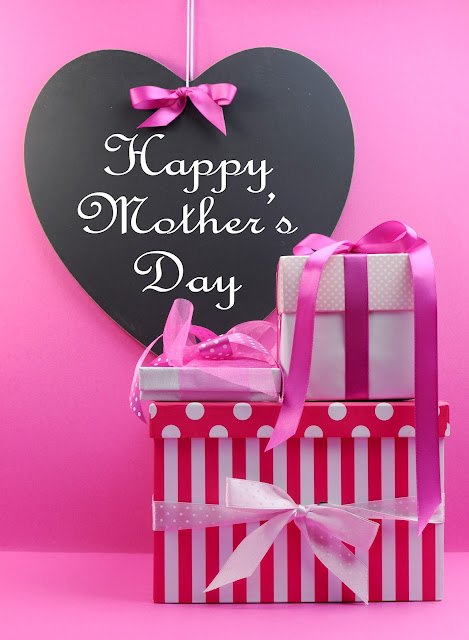 Email ThisBlogThis!Share to TwitterShare to FacebookShare to Pinterest
Labels: May 2017, Mother's Day 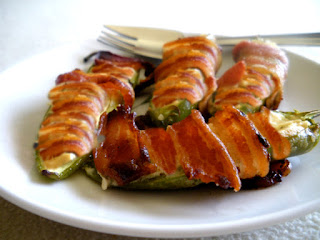 Hey everyone, time for Finicky Friday again! Better than the typical poppers. A friend of mine made these last weekend, and they were fabulous!
Link: http://allrecipes.com/recipe/233603/bacon-wrapped-jalapeno-poppers/

2. Mix cream cheese and Cheddar cheese together in a bowl until evenly blended. Fill each jalapeno half with the cheese mixture. Put halves back together and wrap each stuffed pepper with a slice of bacon. Arrange bacon-wrapped peppers on the prepared baking sheet.

3. Bake in the preheated oven until bacon is crispy, about 15 minutes. 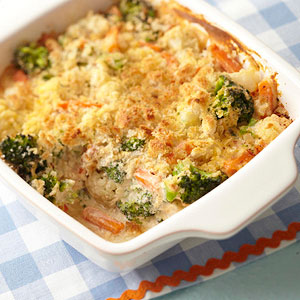 In a medium saucepan, whisk together evaporated milk, onion, flour, garlic, and pepper. Cook and stir over medium heat until thickened and bubbly. Remove from heat. Add cheddar cheese and cream cheese, whisking until melted and smooth.

Bake for 40 to 45 minutes or until mixture is bubbly and crumbs are lightly browned. Let stand for 5 minutes before serving. If desired, sprinkle with parsley and/or basil. Makes 12 servings (about 1/2 cup each).

Link: http://www.diabeticlivingonline.com/recipe/vegetables/cheesy-vegetable-bake/
Posted by MA Church at 12:00:00 AM

DsP Celebrate Romance RT Sale - From May 2 to 7

Celebrate Romance RT Sale - From May 2 to 7. The entire store will be on sale for 30% off. (Sale is set to begin and end based on Eastern Daylight Time.)

Email ThisBlogThis!Share to TwitterShare to FacebookShare to Pinterest
Labels: 30% off sale, Celebrate Romance RT Sale, Dsp, May 2 to 7, May 2017

Riding the Tide (book #2 in the Deep Blue Sea series) - rerelease in KU! 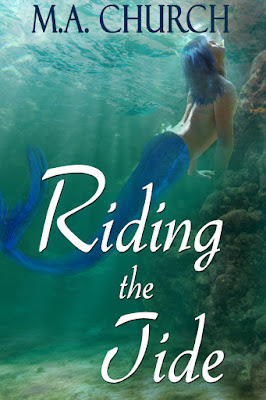 *Second Edition Release. The content and author have not changed.*


Caught between two worlds—what’s a merman to do?

Marcus Krill, a creature of the sea, is a perfectly content bachelor. Mating someone? No thank you. Living anywhere but in the ocean? Ha! Not happening. Spending more than the barest necessity of time on land? Nope. Not this merman. And humans? They’re perfectly fine as a diversion, but that’s all. They might be interesting, but complications follow them like a hungry shark during a feeding frenzy. So what if he’s a little lonely? A little tired of one-night stands? That doesn’t mean he’s ready to mate. Not him.

Blair Estes, a creature of land, is perfectly happy with his nomadic lifestyle. No strings keep him tied to any one place long. Adventure is his lover and adrenaline his master. He loves to travel, and the things he’d seen—things that defy description. Now his wandering has brought him to the Seychelle islands and a mysterious merman who’s going to take him on the journey of a lifetime.

Once again merfolk and human culture collide in an explosion of passion and… fear.

Excerpt:
“Does it matter if he has money or not?” Nisha asked.
Kannon sipped his coffee. “It might in the sense that if he’s a multimillionaire—which I can’t imagine how he could be at his age—his name would be well-known. If he is indeed Marcus’ mate—”
“I think I would know if he’s my mate or not—”
“If he is,” Kannon continued, “it’s going to be really hard for him to just up and disappear.”
“You didn’t disappear,” Marcus pointed out.
“No, I didn’t. But Nisha’s okay with spending part of his time on land. You rarely come ashore. That could seriously be a problem.” Kannon then looked at Nisha. “Anyway, on another note… I guess that answers the question of whether you guys are the only non-humans around. A jaguar shifter. I’d loved to have seen that.”
“I don’t know that you would. From what Blair said, it was a frightening experience.” Marcus remembered how Blair’s voice trembled. That shifter wanted to claim Blair, and that sent a jealous rage burning through him. The idea of someone, or something, claiming what was his infuriated him.
“So he handled knowing what you are without freaking out.” Nisha pursed his lips. “That’s good. That’s really good and one less worry. I’m assuming you haven’t tackled the subject of who he is to you yet, have you?”
“No. I figured I’d already dumped one life-altering event in his lap, it might be better to wait on the other one.” Marcus sipped his coffee again. “Which brings me to exactly why I showed up on your doorstep this morning. It wasn’t because I needed to tell you I found my mate.”
Kannon elbowed Nisha. “Right. The mate you said you never wanted. Wasn’t that you? Weren’t you the one who said he was never getting mated? Never.”
Marcus glared at Kannon. “Shut up.”
Kannon flashed Marcus an evil smile and hummed the wedding march under his breath.
“Can you do something with him?” Marcus pleaded to Nisha.
“I’ve already been threatened with the couch once in this conversation.” Nisha shrugged. “You’re on your own.”
“Will you please stop that infernal sound?” Marcus ordered.
Kannon hooted. “Oh, that’s funny considering some of the sounds I’ve heard coming out of you guys.”
“I’m ignoring you.” Marcus informed Kannon before turning his attention to Nisha. “Anyway, Blair’s my mate. And… I might’ve asked him out on a date for tonight.”
Both Nisha and Kannon blinked. Finally, Nisha spoke. “O-okay. Not sure why you seem so hesitant. Where are you taking him?”
“Sandals. It just so happens Blair is staying at Brett’s resort.”
“That’s good,” Kannon said. “I’ll get in contact with Brett and get you guys a nice table in an out-of-the-way spot for tonight. Well, I would if I wasn’t being ignored.”
Marcus relented and finally looked at Kannon. “You’re enjoying this, aren’t you?”
“Oh yeah.” Kannon smiled. “You better believe it.”
Marcus released the most put upon sigh he could muster. “Fine! I’m not ignoring you. There. Happy?”
“Hmm, could’ve used a little bit more of abject misery in that, but fine. I’ll call Brett,” Kannon said.
“Thank you. I appreciate that. But that still isn’t why I’m here,” Marcus said.
“Stop dragging it out and tell us already,” Nisha said.
“I don’t… I need something to wear tonight.” Marcus wrinkled his nose. “Something appropriate.”
Kannon snickered. “Hmm, is now a good time to point out if you had an aboveground dwelling—”
“I’m never having an aboveground dwelling.”
“Un-huh, keep telling yourself that. For right now let’s focus on your clothing, or the lack thereof.” Kannon scratched his head. “What do you do when you go trolling?”
“Huh?”
“Oh, good grief.”
“What?”
“When you’re out looking to dip your wick. Wanting to bump uglies. You know… do the horizontal hula? Playing on all fours. Sinking the sausage. Bedroom rodeo.”
“Are you even speaking English?” asked Marcus asked, bewildered.
“Jesus. When you’re looking for someone to fuck. Is that plain enough for you?” Kannon demanded.
“You’re a very strange individual, do you know that?” Marcus asked.
“Me? Oh that’s funny.”