Cover Reveal - Cosmic Inception by Alicia Nordwell and a giveaway! 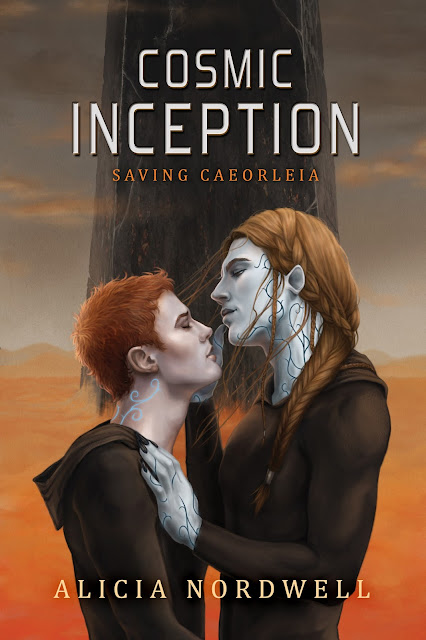 Blurb:
Their journey will span the universe and back, but there’s no guarantee they’ll make it together.

Though Nick and Fieo are drawn to each other, their relationship has never been easy. Their differences go beyond their races, but they’ve managed to work together to prevent the spread of corruption, growing closer along the way. Nick still battles the effects of years of loneliness, fear, and pain but surprises everyone when he refuses to stay behind when Fieo is sent on a vital mission to find the Collectors. Fieo objects, but there’s no stopping Nick when he sets his mind to something. Over the course of their mission, it becomes clear Nick is more than anyone ever imagined, but the mystery of his past threatens to derail his future.

The search for the truth will take Fieo and Nick far from Caeorleia, to worlds both familiar and completely alien, and put stress on their already tenuous relationship. It’s a journey that will either tear them apart or finally bring them together.

“Look at you.” The humid warmth of the garden enveloped and welcomed me. I stroked one finger across the fluffy yellow pod of a waist-high flower. The small strands curled in and then opened back into a wider puff, sending out a glowing powder that drifted high into the night sky. I chuckled. If I didn’t know better, I’d say the small flower was ticklish. I rubbed the pollen off against my shorts, glad I hadn’t tried to smell it. “You haven’t told me about these yet, Jirulm.”

About the Author
Alicia Nordwell is one of those not so rare creatures, a reader turned writer. Striving to find something interesting to read one day, she decided to write what she wanted instead. Then the voices started ... Yep, not only does she talk about herself in the third person for bios, she has voices in her head constantly clamoring to get out.

Fortunately for readers, with the encouragement of her family and friends, she decided for her own sanity to keep writing. Now you can find her stories both free and e-published!She can be found quite often at her blog, where she has a lot of free fiction for readers to enjoy or working hard, or maybe hardly working, as an admin on GayAuthors.org under her online nickname, Cia.

Oh yeah, she's a wife, mom of two, and lives in the dreary, yet ideal for her redhead complexion, Pacific Northwest. Except for when she disappears into one of the many worlds in her head, of course!

Find her at:
Cia’s Stories:http://www.ciasstories.blogspot.com


Goodreads:https://www.goodreads.com/author/show/4479520.Alicia_Nordwell
a Rafflecopter giveaway
Posted by MA Church at 12:30:00 AM