A COOK'S TALE Book Two: Ship Logs of the Santa Claus by Mann Ramblings and a giveaway!

BEING THE NEW GUY
A Cook's Tale is my second published novel by Wayward Ink and I couldn't be more thrilled. For a long time the idea of someone taking enough interest in my stories to actually pay me to write them was unheard of.
There's still a lot of work to be done. Being the new guy on the block, (Oh god, that's such a cliché. Where was my trusted beta during this?) you have to spend nearly as much time marketing yourself as it seems you spent writing the book in the first place. Not a new thing to hear from an author, but it's true. Some people are hesitant to spend their hard earned dollars on an untested face, and I can't say I blame them. And there's always a reader's preferences in genre to contend with shrinking your potential audience. You can't impress a die-hard contemporary fan with a hardcore sci-fi novel.
When you're new, you don't get as many reviews as more established authors. Not to say I haven't received good reviews—I have. In fact, some of them still make me warm knowing someone understood the effort I put forward and appreciated it. However, when you don't get a lot, the bad ones—the ones that seem unfairly harsh—stand out like a beacon and make you doubt your work. I've been fortunate not to receive a lot of this type, but they're still hard to deal with. I'm too new to have a thick skin as of yet. LOL
Some authors are lucky. They connect the right way or have the novel that can't help but go viral from day one. Then there are the rest of us. LOL There are a lot of downsides to having to earn your stripes. The returns are low and you find yourself happy and jealous for your contemporaries winning accolades. They earn and deserve every one, and you know it, but you want to earn your own as well. You want a taste of the limelight, even if it's fleeting. If we didn't crave validation, we wouldn't do what we do, now would we?
And that's really what it comes down to right? I love to tell my stories. I want to paint pictures with phrases and dialogue that reach out to others, making them laugh, cry, and scream at and along with my characters.
Every once in a while I get a message, not a formal review or dialogue between authors, but a reader who found the courage to speak up. A little piece of mail, saying how your story touched their lives in a way that made all the heartache of re-writing and painful doubts of your skills inconsequential. One small letter can amount to a huge success.
I'm not ready to quit any time soon. There's more books in me for people to find.

Giveaway for Book One – The Luxorian Fugitive below!

The trials and tribulations of the crew and passengers of interplanetary transport vessel, The Santa Claus continues in A Cook’s Tale.

After a horrific breakup, Erron Murfin is bitter, homeless, and friendless. When the cook’s position on the Santa Claus presents itself, Erron decides to escape his current circumstances and join the crew. On board he reconnects with family friend Gamin Wells, whose own secrets and issues begin to surface upon Erron's arrival. The least of which is the reason the pair haven't laid eyes on one another in over twelve years.

As Erron settles into his new duties, the men on board take an interest in their newest crew member. Among those intrigued by Erron are polyamorous couple, Barrus and James. Despite Erron's cautious nature, he’s drawn into a triad relationship with the pair.

But there’s something about Gamin…

Is Erron too damaged to confront his own feelings?

Will his past prevent him from finding what he needs? 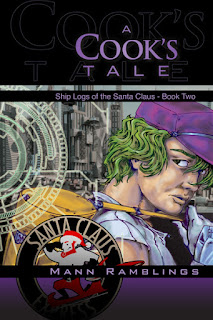 Over two and a half hours had gone by and the game had shifted considerably. Priest had a sizable pile of chips in front of him while Erron's were down to next to nothing. The rest of the group appeared to be surviving through their careful betting.

It wasn't as if Erron was playing badly; he played every hand the way he'd been taught and every time Priest had the better hand. Most of the pile in front of the man was from Erron's holdings; he was losing fast. The worst thing was how he could see that Priest wasn't a better player, he was a fortunate bastard.

If Lady Luck continued to ignore Erron, he was likely to become a misogynist. Adding Toby's bitch fiancée and the fake gypsy at the diner into the list, it seemed lately like every female connected with Erron was screwing him over these days. Good thing his mother wasn't still around to see this.

Every gram of Erron's skill was necessary to quell his frustration. It would be poor form as a player and as a sportsman to start complaining. He wanted to fit in with the crew, the last thing he needed was to be marked as a sore loser.

Priest dealt the next round and Erron found himself looking at four hearts in his hand, a possible flush. After one round of careful betting, everyone folded except him and Priest. Erron was determined to win back part of his winnings and get back into the game.

He passed back one card while Priest replaced three. A fifth heart completed his flush hand with a queen high. The odds of Priest beating him were slim.

“I'll start with fifty,” Erron said and pitched a red chip into the pot.

Priest's eyes narrowed while his sly grin made Erron nervous. He grabbed a stack of blue chips, counted them, and set them in the center.

“I'll see your bet and raise you a thousand.”

Erron quickly counted his stash. “That puts me all in, but I can't cover it. I'm short three hundred fifty.”

“Of course you can. Your shirt and pants are worth three hundred a piece,” Priest answered. His glee couldn't be hidden.

The grin on Priest's face was far too bright as he explained. “Shirt and pants are worth three hundred. Underwear is worth five. House rules.”

“House rules, James. He didn't have to agree to it.”

Erron wanted to pound his head on the table for not asking details. He was so intent on being part of the group, he failed to find out what he was getting himself into. The first rule of gambling: never play a man at his own game.

“It's fine, James. I'm not someone who doesn't follow through,” Erron said. James begrudgingly relented. “Are there any more of the house rules that I need to know before we continue?”

Priest gave a knowing Cheshire grin to James. “Why don't you tell him, James?” James squirmed in his seat before looking Erron in the eye. He was clearly not happy to pass along the news. His words were slow and tinged in apology.

“Whoever loses and ends up naked spends the night with the winner of the game.”

Laughing in disbelief, Erron scrubbed a hand through his hair. What had he gotten himself into? No wonder the men were playing so conservatively. No doubt once someone lost, the game would gain a new level of aggressiveness while the boys combated to be the final winner. This kind of game was probably pretty common. He should have known better, playing poker with a batch of strangers was risky enough, but with someone as sketchy as Priest, it was downright idiotic.

“You don't have to do this, Erron. I should have said something when house rules came up,” James said. Guilt riddled the poor man. Priest looked absolutely perturbed at James' suggestion. Erron considered letting the supply officer stew for a while, but he really wasn't offended by the house rules. None of the men at the table were unattractive, and he'd been catching furtive glances from them since he'd walked through the door. A night with any one of them would be a nice distraction. No matter what the fake gypsy had foretold, he wasn't looking for true love right now.

“It's okay, James,” Erron said. “Besides, you might actually win.”

With a wolfish grin, Erron peeled his shirt over his head, catching the complete attention of all the players. As his flat, tight stomach came into view, all conversation stopped. Every male in the room projected his need at Erron without a single syllable. He tossed his shirt into the pot before he unbuckled his pants. A collective gasp went through the room as he peeled his clothing down his lean, taut thighs and depositing it on top of his shirt. Erron stood before the men in a pair of snug, wine colored briefs that molded obscenely to his form.

Like many gay men, when MANN RAMBLINGS grew up, there weren't any heroes he could relate to. The world held him back while he tried futilely to hide the real person inside. So much has changed since those hollow days. He finally found his voice, the voice that says it’s all right to revel in the so-called inappropriate joys, laughs, and loves that storm inside a man's head. It took a long time to find that courage and now that it's here, he plans to use it well.

While spending years more focused on visual arts, he never let go of his innate passion for storytelling—he wanted to write and draw comic books when he grew up. Once he discovered M/M fiction, a whole new world opened with new possibilities. Why couldn't you have fantastic and dynamic tales with an M/M cast? He started reading the online tales of authors like, Night Tempest, Rob Colton, and Alicia Nordwell, which only fueled within him the need to create. Eventually he found GayAuthors.org, and with a little coercive nudge from Night Tempest, started sharing his tales with an unexpected level of positive response. That experience and support gave him the courage to cross his fingers and aim for the world of M/M publishing.

Born and raised in Michigan, Mann Ramblings continues to type away, wishing it was practical to use a noisy, old fashioned keyboard that clacks with each strike, if only to annoy his loving partner and spoiled miniature dachshund.


MANN RAMBLINGS can be found at:
Blog: http://mannramblingsblog.wordpress.com
Facebook: https://www.facebook.com/mannramblings
Twitter: @mannramblings
Posted by MA Church at 12:00:00 AM