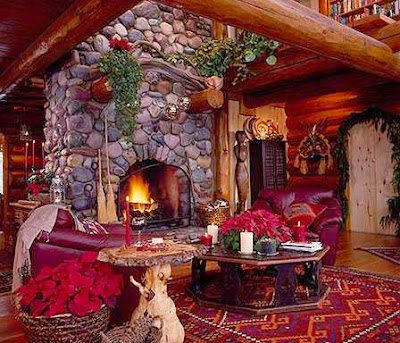 A short story from the men in Trouble Comes in Threes. This was written in 2014 so some of you may recognize it lol!

Finally.
I picked up a few stray cups of eggnog, took them to the kitchen, and quickly washed them out. The party had gone well. One of my mates, Tal, had come up with the idea of having our Alpha, and the rest of the betas, over for a rousing game of Secret Santa. Since the clowder I now belonged to werecat shifters, they didn’t worship as humans. And since my mates Dolf and Tal found me and mated me, I, too, was no longer human.
Hard to believe it’s almost been a year since that night.
Of course, no longer being human didn’t change the fact I missed having a Christmas tree with a pile of gifts underneath. I glanced over at the soaring, white flocked tree standing in front of the den’s prowl windows. We lived in a huge log house with a truss system that Tal had built before they’d found me.
Honestly, the place was nothing more than a cat play area.
The fireplace crackled, the smell of burning wood relaxing me. This was our first Christmas together, and it had been perfect. The sounds of nails clicking on hardwood floors drew my attention from the fireplace.
A rather large, jet-black cat raced down the hall hot the on the heels of a snow-white cat. Grinning, I sat on the couch. They’d eyed the tree from the first night we’d put it up and decorated it. All those shining, gleaming objects had driven my mates nearly insane.
Cats and Christmas trees. Boy, if that wasn’t just asking for trouble, I didn’t know what was.
A blur of white flew past me as Tal ran the length of the room. Dolf was right behind him, swatting at Tal’s hind legs. Tal yowled playfully over his shoulder at Dolf, and then leaped up to on one of the numerous shelves throughout the den. Dolf sat on the ground, his tail swishing as he looked up at Tal.
“Meooow!” Tal’s playful purr echoed around the room.
Even I heard the dare in that. Shaking my head, I looked at Dolf.
“Meeer,” Dolf answered calmly, and then leaped at the shelf Tal sat on.
Damn, the power in those hind legs was amazing. Tal scrambled down the walkway, hauling ass. He kept going until he hit the truss system of the log cabin, flying across the logs as if he was just a few feet off the floor instead of fifteen feet, if not more. The first time they did this, I just about had a heart attack.
Suddenly, Tal stopped and spun around to face Dolf. Tal arched his back, fluffing up. Dolf stopped too, but didn’t back off. Instead he ignored Tal’s warning  as he slowly prowled closer, his bright blue eyes slitted.
“That never works, pretty kitty,” I called from the couch where I was reclining. “Dolf’s gonna swat that cute little ass of yours if you’re not careful.”
Our sweet little Omega just didn’t have it in himself to intimidate Dolf. For that matter, neither did I, but I did often stand up to the man. The smartass in me couldn’t help himself. Surprisingly, Dolf was okay with that. Said it kept him from being too arrogant. The male was the heir apparent to their clowder. Arrogant was his middle name.
“Meerow.” Tal sniffed at my direction, turning his back to me and sticking his tail straight up.
“Yeah, I’ll take you up on that offer just as soon as you’re human,” I called from the couch.
“Rawl!” Dolf bellowed in agreement.
Laughing, I watched them race down the truss system to the shelves and on down to the floor. Tal ran at me, jumping on the couch and straight onto my lap.
“And how did I know you’d end up here?” I found myself with a lap full of white cat and sank my hands into that lean, lanky, furry body. “Watch the claws, babe.” Jesus, the last thing I needed was him to sink his claws somewhere important.
Seconds later Dolf launched himself at me, too, and sure enough, I ended up with over sixty pounds of feline sitting on me. Dolf and Tal were the size of Savannahs. They were big, big cats.
Dolf licked my cheek while Tal kneaded my thigh. I ran my hands over both of them, enjoying the silky fur.
“Are we done or….” The flashing lights of the tree caught Tal’s attention, and he was off again. “Oookay, guess not.”
Dolf head butted me, grunted in Tal’s direction, and jumped off me. He raced across the top of the coffee table… and headed straight toward the twinkling Christmas tree.
Oh man, I knew it. It was more than their little kitty nature could handle. “Okay you two, you break any of those ornaments and I’m not gonna be happy.” 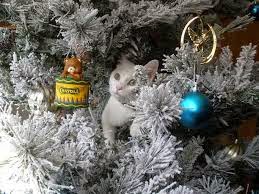 Tal landed on one of the few brightly wrapped gifts not yet opened and launched himself up the tree. A flash of black, and there went Dolf too. Damn good thing the tree was ten feet tall and the ointments weren’t glass.
Yeah, I’d had a feeling.
A yowl sounded from the tree, but I couldn’t tell which one it was. In fact, Tal was hard to see since he faded into the white background of the tree, but the sparkly red ball a white paw was batting at was a good clue where he was. I heard hisses and mewls coming from them as they amused themselves.
Then God help us, Tal found the pretty red tinsel I’d draped on the tree. What had I been thinking? And wow, he was having entirely too much fun fighting the stuff. The tree shuddered, and I held my breath, but it stayed upright. The two of them played in there for another fifteen minutes or so while I watched. A few balls fell off, tinsel lay on shreds on the floor, but the tree remained standing.
Somehow. 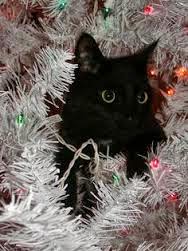