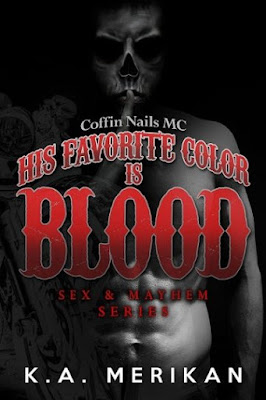 First off let me say I’m a fan of these two ladies. What I like so much about them is their ability to dip into the darker side of things without turning me off. I’ve read all the books in this series, and this was the one I’d been waiting on.
Before I go any farther, let me say this—read the warning in the blurb. Don’t skim over it, and don’t ignore it because it tells you exactly what you’re getting into. This is dark. This is bloody. It’s even scary, psychologically speaking. If you’re looking for fluff, this most certainly is not it.
You’ve been warned. o.0 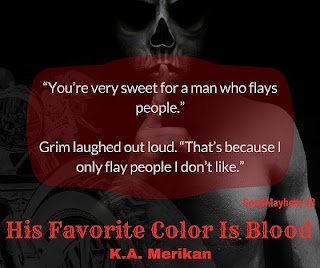 So, Grim is my favorite in this series. He’s twisted, he’s dark, and if he was ever tested, I’d say he was most likely a psychopath. He’s not actually part of the Coffin Nails MC, but the biker gang does call on him to do ‘jobs’. Grim’s a killer… and he enjoys it. And just when you think there’s no redeeming quality to him, we find out that he enjoys the kills, but only when they’re justified. The book has the title it does for a reason LOL.
And Grim’s sexual preference is a little out of the ordinary too. Of course, lol. It’s a fetish I’ve heard of before, but haven’t delved deeply into. But that fetish plays a very important role in the book, for both Grim and Misha. 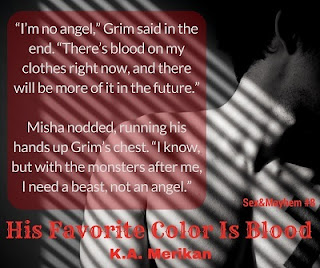 While I found Grim fascinating, Misha is the one who tugged at my heartstrings. He’s broken, and when I say broken, I mean completely broken. What was done to him would destroy most people… it was utterly horrifying, and I actually had trouble reading that section. (Again, this is where I point out you’d better know what you’re getting into with this book, because it isn’t all chocolate covered roses.)
Grim wants someone to love. Misha wants somebody to look past his physical ailments. These two have a long road in front of them dealing with their separate issues and with each other. There were times I wanted to smack Grim upside the head, but I had to keep reminding myself his outlook was a different from most peoples.


This is a hard, dark story that involves two people twisted by tragedy who do find love… and love comes in all shapes and forms.

ARC provided by the authors in exchange for an honest review.