Release of Riding the Tide and buy links 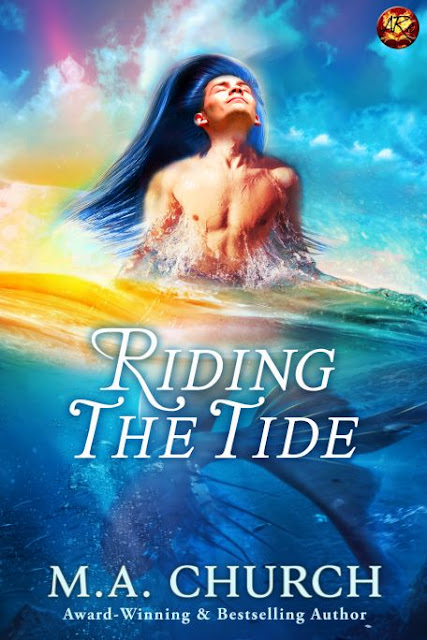 Yay! Riding the Tide has released!!

I’m often asked how challenging was it too write Riding the Tide. Fantasy isn’t something I often explore in my stories, but I’ve been drawn to the mermaid/man mythology for a long time. I decided to tackle it and treat it like I do my paranormal and science fiction stories. That meant the very first thing I had to do was research.
And research.
And research.
LOL. Good thing that’s something I’m familiar with. After taking a couple pages of notes and talking with my beta reader, Alicia Nordwell, I had a basis. But, to be honest, I already had an idea of what I wanted to do.
Several years ago I saw this “fake documentary” called The Body Found and The New Evidence on Animal Planet. The ideal for a mermen story took root. It took me a couple years to get to it, but Beneath the Surface, was born. Not long after that, Riding the Tide came along, lol.
I guess the hardest thing writing this was trying to explain how my two mermen changed back and forth from human to their mer form. It’s kind of like writing shifters—we authors just have to wing it. I chose to make the process painful for them.
To me that seems more realistic, especially since Nisha and Marcus are not magical creatures. They’re actually humans who’ve evolved in a different way than us. They took to the water while we stayed on land. Some of this came from that fake documentary I mentioned earlier.
Even though it’s not real, it does seem plausible, and that’s something that’s very important to me in this type of story. Another hurtle I had to tackle was when the human mates were changed and opened their gills for the first time to breathe underwater. And back to researching I went, lol.


I guess the best thing about these two stories is I didn’t go into it with preconceived ideas. The idea from my mermen may not follow what’s already been written, but that’s okay. *grin* I like putting a twist on things!

Caught between two worlds—what’s a merman to do?

Marcus Krill, a creature of the sea, is a perfectly content bachelor. Mating someone? No thank you. Living anywhere but in the ocean? Ha! Not happening. Spending more than the barest necessity of time on land? Nope. Not this merman. And humans? They’re perfectly fine as a diversion, but that’s all. They might be interesting, but complications follow them like a hungry shark during a feeding frenzy. So what if he’s a little lonely, a little tired of one-night stands? That doesn’t mean he’s ready to mate.

Blair Estes, a creature of land, is perfectly happy with his nomadic lifestyle. No strings keep him tied to any one place long. Adventure is his lover and adrenaline his master. He loves to travel, and the things he’s seen defy description. Now his wandering has brought him to the Seychelles and a mysterious merman who’s going to take him on the journey of a lifetime.
Once again merfolk and human culture collide in an explosion of passion and… fear.

Brett sighed, taking a sip of his water. “I did warn Nisha. Granted, it was after the fact, but still. Even went on to tell him how badly I reacted when Brooke did the same thing to me.”

Marcus picked up one of the chilled shrimp appetizers and bit into it. Personally he thought they were better uncooked, but that was just him. “Why? He didn’t harm him.”

Brett sighed even louder. He pulled his cell phone out of his pocket and typed something into it. A few seconds later he turned the screen around so Marcus could see it.

“Oh, funny,” Marcus snapped as he stared at the definition of “consent” on the cell phone’s screen.

“Here’s a thought. Try reading the damn definition.” Brett glanced back over his shoulder at Nisha and Kannon.

Marcus shrugged his shoulder as he watched Nisha grabbed Kannon and try to kiss him senseless. Well, that was one way of ending an argument.

“You know, maybe if you guys would, a bunch of shit could be avoided later,” Brett said.

“Hmm? Would what?” Marcus asked, distracted by Kannon and Nisha. Kannon struggled for a minute then gave in, but Marcus wasn’t fooled. He’d gotten to know Kannon well enough to know Kannon didn’t give up easily when he wanted something—which was probably an apology and an acknowledgment that Nisha was wrong.

“Good grief, what’s up with you lately?” Brett asked. “I said if you guys tried reading the definition of consent then a bunch of shit could be avoided later.”

“Oh.” Marcus nodded. “I suppose so, but I’m not planning on mating a human—or anyone else—so it’s irrelevant.”